Condition – ExcellentSize – SmallCondition Details – Pristine colour, very smooth material with odd tiny bobble, badges are excellentDesign – ErreaFeatures – ’27. Juni 2016 Stade De Nice Nice’ to frontPlayers – Hermannsson, Ingi Ingason, Sigurdsson, Gunnarsson, GudjohnsenDetails – Home shirt as worn by Iceland in the finals of Euro 2016 in France. After overcoming the likes of the Netherlands who top their qualifying group, Iceland found themselves at a major tournament for the first time in their history. The Icelandic staggered many by progressing to the round of 16 after 1-1 draws with Hungary and eventual winners Portugal and a 2-1 win over Austria in the group stages the side face England. Despite going behind after just 4 minutes the Icelandic men were level 2 minutes later and took the lead on the 18th minute. A historic win saw them progress to the quarter-finals before bowing out to hosts and runners-up France. Although out of the competition the ‘Icelandic Clap’ with the fans left its mark with many teams copying the renditions, showing unity between fans and players 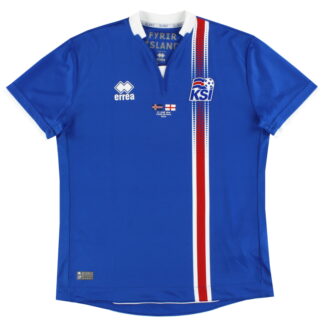