Condition – ExcellentSize – Medium (38″)Condition Details – Pristine colour, very smooth material, faint crack to reverse #0 badges and sponsor are excellent, great exampleDesign – UmbroFeatures – Rooney #10 to reverse in official plastic print, small #10 to frontTeam mates – Defoe, Terry, Johnson, Crouch, GerrardDetails – Home shirt as worn when England competed in the 2010 World Cup with the squad making it out of their group as runners up behind the USA but were eliminated in the next round following a 4-1 loss to Germany which included a Frank Lampard goal not being awarded despite the ball crossing the line which would have leveled the match at 2-2, eventually leading to the introduction of goal line technology in 2012. 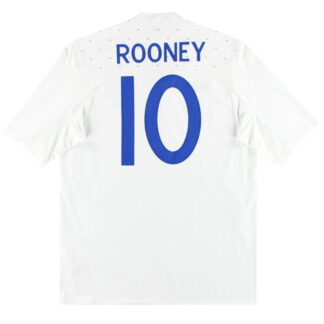